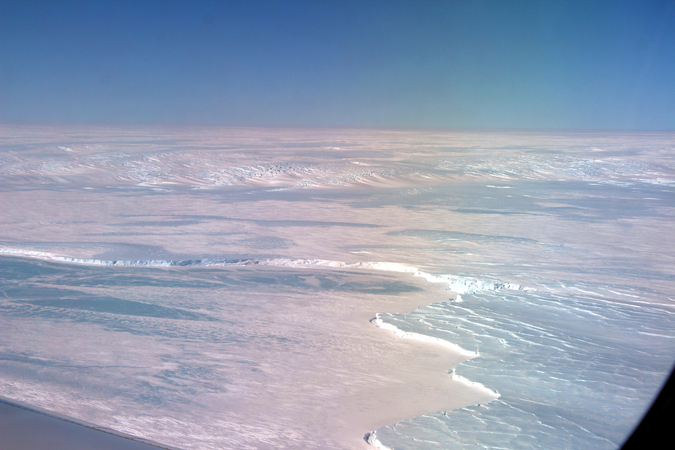 NASA's IceBridge mission flew over the Denman Glacier region, in East Antarctica, on Oct. 30, 2019. The glacier is creeping down a slope that plunges into extreme depths, new research finds, potentially igniting a feedback process that could unload trillions of tons of ice into the ocean. MUST CREDIT: Operation IceBridge/NASA

Scientists have found a new point of major vulnerability in the Antarctic ice sheet, in a region that already appears to be changing as the climate warms and has the potential to raise sea levels by nearly five feet over the long term.

Denman glacier, in East Antarctica, is a 12-mile-wide stream of ice that flows over the deepest undersea canyon in the entire ice sheet before spilling out into the ocean. That subsea trough is more than 2 miles deep, or double the average depth of the Grand Canyon. While there are far deeper trenches in the open ocean, such as the Marianas Trench, in this case the extreme undersea topography lies right on the outer fringe of the Antarctic continent - making it the "deepest continental point on Earth."

That deep canyon is a potential pathway for the ocean to infiltrate deep into Antarctica's center - posing a threat of significant sea level rise.

Denman glacier, which fills the submerged canyon with extremely thick ice, has begun to respond to climate change. It is creeping backward down a slope that plunges into these extreme depths, new research finds, potentially igniting a feedback process that could ultimately unload trillions of tons of ice into the ocean.

"The configuration of the bed of the glacier makes this one of the weakest spots in east Antarctica," said Virginia Brancato, a NASA scientist who was the lead author of the new study in Geophysical Research Letters. "If I have to look at East Antarctica as a whole, this is the most vulnerable spot in the area."

So far, scientific attention has been mostly trained on the West Antarctic ice sheet. That's because several glaciers in West Antarctica - most of all, the enormous Thwaites glacier, the subject of a multimillion dollar international research mission - have been losing ice rapidly as they are undercut by warm ocean water.

But East Antarctica has the potential to release more ice, and some of its glaciers may be vulnerable to the same process affecting the glaciers in West Antarctica, which scientists refer to as "marine ice sheet instability."

"The ice reservoir in East Antarctica is nine times that of the West Antarctic ice sheet," said Helen Amanda Fricker, a glaciologist at the Scripps Institution of Oceanography who was not involved in the current study but reviewed it for The Washington Post. "So when its contribution kicks in, it will be noticeable in future sea level rise."

The race is on to find the vulnerable spots in East Antarctica - and with the new research, Denman glacier tops the list.

"This study provides additional evidence that, based on current knowledge, we cannot exclude at least a slight possibility of much more sea-level rise than the most-likely value in [Intergovernmental Panel on Climate Change] projections," said Richard Alley, a glaciologist at Penn State University who did not work on the study.

The study used satellite techniques to determine the so-called "grounding line" of Denman glacier has retreated inland more than 3 miles toward the center of Antarctica in the last 20 years.

The "grounding line" of a marine glacier, such as Denman, is the point deep beneath the sea surface where ocean, bedrock and ice all meet. Farther outward from the grounding line, the ice is afloat and no longer touching bedrock. Farther inland, the ice no longer has contact with the ocean.

If a grounding line is moving backward, more ice is floating, and the ocean is penetrating further inland with the glacier in retreat. That's what's happening at Denman, scientists say.

In this case, the grounding line has not only moved backward, but it has also moved down a steep slope into the two-mile-deep canyon atop which the glacier sits. This means the ice front that the glacier presents to the ocean has gotten thicker. It is more than a mile thick, but it has the potential to increase to two miles of thickness if the glacier backs fully into the depths.

Scientists describe this type of glacier configuration as a "retrograde slope" and have determined it can lead to a runaway feedback process in which ice loss begets more and more ice loss. The more the glacier's grounding line backs down the slope, the thicker the ice becomes. This means the ice can flow outward faster and also that more of it will be exposed to ocean waters capable of melting it.

"In this configuration, it means that once the glacier starts retreating, it's very hard to stop it," said Eric Rignot of the University of California, Irvine, one of the study's authors. "You sort of open the floodgates."

Elephant seals fitted with sensors on their heads have been used to take measurements of the water temperatures off the coast of Denman glacier. The resulting readings show temperatures more than sufficient to melt ice, around -1 degrees Celsius, in the ocean offshore at about 300 meters of depth. If that water is making its way beneath the glacier's floating portion, its "ice tongue," and all the way to the grounding line, the melting potential would be high and explain why Denman already is in retreat.

"We have the indirect signature of that warm water by the fact that the ice is melting from the bottom at relatively high rates compared to the rest of East Antarctica," said Rignot.

Denman already has lost over 250 billion tons of ice, researchers have calculated, equivalent to a little over half a millimeter of sea level rise. But there are 540 trillion tons of ice loss potential if the glacier were to travel backward across the entire subterranean canyon - a distance of nearly 100 miles. At this point, the melting could then reach a critical area of Antarctica called the Aurora Subglacial Basin.

Here, enormous volumes of ice rest on a bed well below sea level. If the ocean gets into the Aurora Basin due to the loss of Denman glacier, there is the potential for nearly five feet of sea level rise.

It's unclear how fast this dynamic could play out. In a region with a complex and little understood undersea topography, it's unknown how much warm water is making it to the base of Denman, and that makes a huge difference, said Donald Blankenship, a glaciologist at the University of Texas at Austin who has conducted extensive research on East Antarctica.

"What they've proven is there is a path for that warm water to get to the grounding zone. They have proven existence, not sensitivity," Blankenship said. "And that's important."

Experts pointed out another key factor that could slow down Denman's ice loss. The pathway into the deep canyon appears to be relatively narrow, with extremely high and steep rock walls that will provide friction that could slow the ice flow.

"The situation is quite complex, with the steep retrograde slope and great depth favoring instability, but the narrow fjord, as the authors point out, perhaps favoring slower changes or even restabilization," Alley said.

For now, scientists cannot say how rapidly Denman is likely to lose ice - only that it is already doing so and shows a worrying geometry.

"All the elements that are there," said Brancato. "The bed topography and the melt rates that we observe very close to the grounding line make it the perfect recipe for the glacier to keep on retreating."